For students who gain their qualifications legitimately – who attend lectures, write assignments and sit for exams, often for several years – the certificates they receive at the end are the whole point. They’re proof of effort spent and knowledge gained. They open doors to further study and employment. They’re signifiers of success.

But the value of tertiary certificates makes them vulnerable to fraud. For years, online degree and diploma mills have capitalised on this need, producing illegitimate certificates that falsely claim to be from almost any international university for a fee.

In South Africa, scarce employment opportunities has made this a pervasive problem, though even prominent public figures have been caught lying about their qualifications (therefor the increasing need for blockchain-based certificates). The scandals around former SABC CEO Hlaudi Motsoeneng, who lied about having his matric certificate, and PRASA Chief Engineer Daniel Mtimkulu, who falsely claimed to have a degree from Wits University, may ring bells for many.

Fortunately, both universities and employers are aware of this issue, and new innovations have increasingly made it more difficult to duplicate or falsify certificates. Recently, the University of Johannesburg (UJ) has taken its efforts even further. It is now the first South African tertiary institution to use blockchain technology as an additional security measure to protect its certificates against alteration or falsification (blockchain-based certificates).

“UJ first identified the need to improve the security features on its certificates more than 10 years ago,” says Dr Tinus van Zyl, Senior Director of Central Academic Administration at UJ. “We started making it harder to duplicate our physical paper-based certificates by using a variety of technologies, some of which are used on banknotes. Then, in 2019, we became the first university in South Africa to issue digital certificates.”

The need for digital certificates (blockchain-based certificates) has grown exponentially in recent years. Graduates increasingly want to be able to share qualifications electronically with potential employers, who in turn need to be able to validate these certificates quickly, easily and affordably.

From 2022 onwards, all of the certificates UJ issues to its graduates will include blockchain-based QR codes. This will enable anybody to scan these codes with a smartphone to verify that the certificate has been legitimately issued by UJ and that all the information is correct.

Blockchain, a key innovation in the era of the Fourth Industrial Revolution (4IR), is a means of recording information in such a way that it is impossible to change or hack. “Essentially, a blockchain is a distributed ledger of transactions,” says Dr Jaco du Toit, Deputy Director of the Centre for Cyber Security at UJ. “This means that the ledger that keeps track of a transaction doesn’t exist on just one computer. Instead, copies exist on a number of computers on the internet that communicate with each other to keep the relevant information in sync.”

What makes blockchain interesting, Dr du Toit goes on to explain, is that once a transaction has been recorded, it can’t be modified and no one can deny that it didn’t take place. If you want to change something on a distributed block, you have to change all the blocks. As a result, the integrity of blockchain transactions is irrefutable.

While blockchain has become renowned for its role in cryptocurrencies, it also serves to regulate smart contracts – and it is this application that UJ has tapped into.

“If contracts are stored on blockchain,” says Dr du Toit, “the system indicates when two or more parties have fulfilled their respective ends of the deal. UJ’s blockchain-based certificates are therefore an innovative way of using a critical 4IR technology to issue a certificate for a particular student for a particular degree. By scanning the code, users can confirm that the certificate is authentic and belongs exclusively to UJ and to the student concerned.”

“By incorporating blockchain technology into our records, we’re able to reassure our graduates and anyone they share their certificates with that these documents can be trusted,” Dr van Zyl adds.

‘It’s not just for us; it’s for our industry’

At the end of 2022, UJ will issue almost 30,000 certificates for its degrees, diplomas and short-learning programmes. Every single one of these certificates will be blockchain-enabled. But over this innovation, UJ has no sense of ownership.

“We feel that it’s important that other universities make use of this technology, too,” says Dr van Zyl. “It’s not just for us; it’s for our industry. If all tertiary institutions collectively improve the integrity of their qualifications and enable companies to verify their qualifications quickly, easily and at no cost, then we can all help to prevent certificate fraud and curb counterfeiting.”

As blockchain technology continues to evolve and its uses expand and mature, UJ will seek out ways to use it to further improve the integrity of its qualifications. For the students who have worked so hard to graduate, there can be no greater service. Click here to see a short course in Blockchain Technology for Professionals in Business. 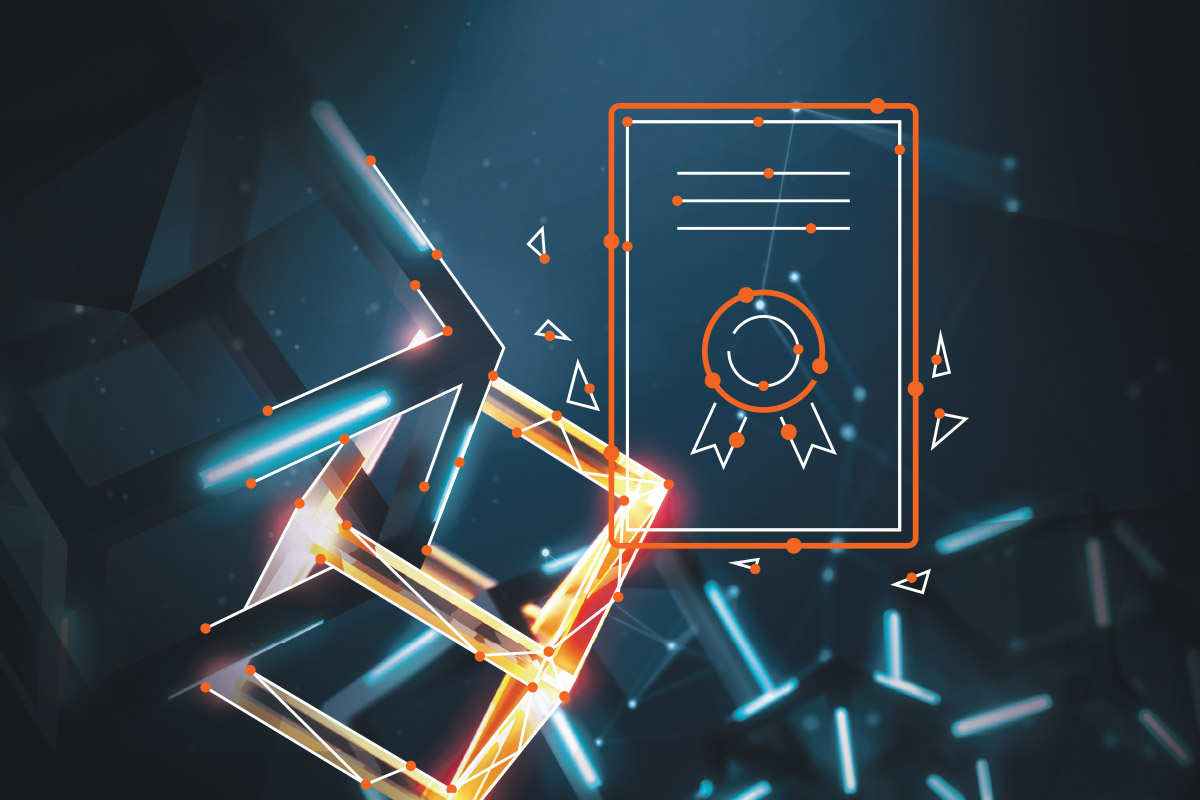 “UJ first identified the need to improve the security features on its certificates more than 10 years ago (like blockchain-based certificates),” says Dr Tinus van Zyl, Senior Director of Central Academic Administration at UJ

“If contracts are stored on blockchain,” says Dr du Toit, “the system indicates when two or more parties have fulfilled their respective ends of the deal.